Evening gents, it’s Max from The Young Gentleman’s Guide here! Apologies for not putting up any posts last week, we decided to take a day off for Memorial Day. I was planning to put up a regular post on Friday, but the time just got away from me, with some old friends coming to visit. With that in mind, I will still put up the post I was planning for Friday, which actually pertains to Memorial Day. In honor of those who gave their lives defending the freedoms of the American people, I thought I would pay tribute to who I believe is one of the greatest American heroes in history: the bandleader Glenn Miller (1904-1944). For those who are unaware, Glenn Miller was one of the greatest bandleaders of the swing era. His music is said to be the bridge between the bridge between jazz and pop. One of the biggest things Miller is known for is forming the US Army Air Force Band in 1942. It was their job to spread morale and entertainment to the servicemen in the war effort during World War II. After being formed, they traveled throughout England and performed over 800 times, and they they made several appearances on the radio, broadcasting to soldiers all over the world. They were also planning to perform in Paris in 1944 after its liberation from the Nazis, but had to do so without Miller, as his plane disappeared over the English Channel on December 15. The band’s music in and of itself was also used as subtle counter-propaganda meant to denounce the spread of the fascist regime by Italy and Germany. As Miller stated himself, “America means freedom and there’s no expression of freedom quite so sincere as music.” 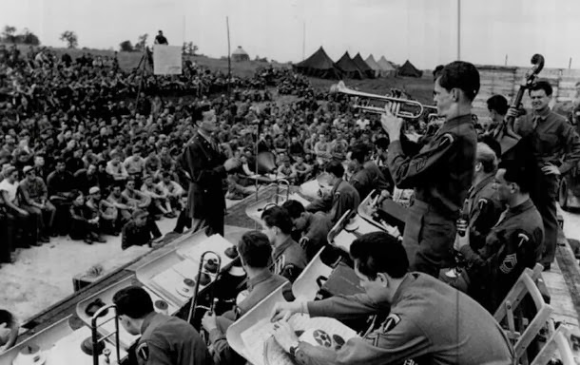 This, to me, is what makes Miller one of the greatest heroes in American history, and here’s why. Imagine, if you will, that you’re an American soldier in the thick of World War II. You’ve had to travel halfway around the world to fight against the Axis Powers. You’ve had to leave your family and have seen several of your fellow soldiers die on the battlefield. If that were me, between missing home and having to witness such atrocities, I feel like my morale would be at a huge low. I feel like I wouldn’t have much motivation to keep going. Moving on, one night you post up to rest with your platoon, and one of your buddies decides to turn on the radio. You stumble across a broadcast of the Army Air Force Band, led by Glenn Miller, and hear such swing classics as “In The Mood”, “Moonlight Serenade”, and “Pennsylvania 6-5000”, all tunes that were synonymous with American culture at that time. Hearing such music that reminds you so much of home suddenly makes you realize why you’re in the war effort to begin with. It’s those ideals of freedom and liberty embodied in Miller’s music, that you’re fighting for. It also reminds you of your family back home, and also helps you realize that you’re fighting to defend your father, your mother, your brother, your sister, your fiancée, your wife, whoever it may be. It’s the same reason bands like the Rolling Stones and Black Sabbath are practically synonymous with the Vietnam War. That music was the equivalent to Glenn Miller’s music in World War II. It reminded them of home and gave them motivation to keep fighting. It is my firm belief that without the morale boost of Glenn Miller’s music, the Allies would have had a much harder time fighting back against the Axis Powers, and could have possibly lost the war. Speaking again from Miller, “We didn’t come here to set any fashions in music. We merely came to bring a much-needed touch of home to some lads who have been here a couple of years.”

In my honest opinion, Glenn Miller is just as much of an American hero, if not more so, than any soldier or strategist who fought on the ground. With his music being synonymous with America at the time, and its power to be such an incredible morale builder, Miller has certainly gone down as a courageous, dedicated,  honorable, yet underappreciated hero of America. If you’ve never heard his music, I cannot stress enough how much I encourage you to listen to it. Whether you feel the same effect that it had on the WWII soldiers or not, it’s undeniable how much this music shaped American culture during its time. His music is easy to come by as well, able to be found on iTunes, Spotify, and Pandora, or you can even find clips of it on YouTube. Tunes I would most recommend to start with are “In The Mood”, “Moonlight Serenade”, “Pennsylvania 6-5000”, “Chattanooga Choo-Choo”, and “String of Pearls.” In any case, thank you so much for reading today’s post from The Young Gentleman’s guide, and nothing would make me happier than if you shared this post with a friend, followed the blog, and checked out The Young Gentleman’s Guide on Facebook, Twitter, and Instagram. And on that note, this is Max from The Young Gentleman’s Guide, and I’ll see you next time!

Many of the inspirations for my posts come from The Art of Manliness, but I am in no way sponsored or endorsed by them. I just find their tips incredibly helpful, and I think you will too!